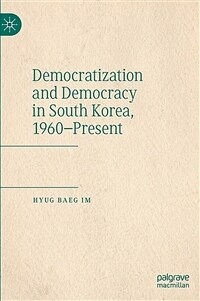 Democratization and globalization in Korea : assessments and prospects

The dispersed families in Korea

The experience of democracy and bureaucracy in South Korea / First edition

Federal Council of the Churches of Christ in America. Commission on Relations with the Orient
320.953 F663k

The failure of democracy in South Korea

Korea : the politics of the vortex

The search for a unified Korea : political and economic implications

The institutional basis of civil governance in the Choson Dynasty

Japanese and Korean politics : alone and apart from each other

Rethingking southkorean land reform : focusing on U.S. occupation as a struggle against history

The journal of the Korean economy

Crony capitalism : corruption and development in South Korea and the Philippines