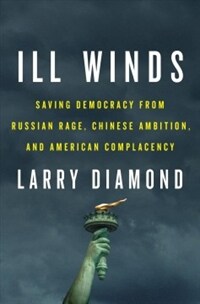 자료유형
단행본
개인저자
Diamond, Larry Jay.
서명 / 저자사항
Ill winds : saving democracy from Russian rage, Chinese ambition, and American complacency / Larry Diamond.
발행사항
New York :   Penguin Press,   c2019.
형태사항
354 p. ; 25 cm.
ISBN
9780525560623 (hardback)
요약
"From America's leading scholar of democracy, the definitive exploration of today's dangerously rising wave of authoritarianism, from Asia to America--and a personal, passionate call to action that shows us how to restore U.S. democracy and global leadership. Larry Diamond has made it his life's work both to study democracy and to advise dissidents fighting autocracy around the world. But when Donald Trump won the presidency by openly rejecting basic democratic norms, this lifelong scholar of democracy's struggles abroad felt a horrible sense of danger at home. As Diamond has long chronicled, democracy expands and retreats in waves. From the 1970s into the 1990s, the "third wave" saw democracy spread through Europe, Latin America, Asia, and Africa and attempt to take root in the former Soviet empire. But since 2006, Diamond has tracked a global democratic recession. By 2016, illiberal rulers were eroding democracy in Hungary, Poland, Turkey, the Philippines, and more, while China and Russia--the world's leading autocracies--grew increasingly bold and bullying. And with Trump's election, the global retreat from freedom spread from democracy's margins to its heart. Diamond's core argument is stark: The defense and spread of democracy has relied for decades on U.S. global leadership, including its alliances with advanced democracies in Europe and Asia. If America does not reclaim its traditional place as the keystone of democracy, today's authoritarian trend will accelerate into a "third reverse wave" of democratic breakdowns. That wave could become a tsunami. And that could let Vladimir Putin, Xi Jinping, and their admirers turn the 21st century into a dark time of surging authoritarianism. But it's an ill wind that brings no good with it. Free governments can defend their values; free citizens can exercise their rights. Diamond explains how we can make the Internet safe for liberal democracy, how we can exploit the soft, kleptocratic underbelly of dictatorships, and how we can revive America's degraded democracy. He offers concrete, deeply informed suggestions for policymakers and citizens alike, including ways to fight polarization, reduce the influence of money, combat partisan gerrymandering, expand voter turnout, and negate the electoral college. We are at a hinge in history, between a new era of tyranny or a new age of democratic renewal, and freedom's last line of defense is still "We the people.""--
내용주기
Chapter 1: Introduction: The Crisis -- Chapter 2: Why Democracies Succeed and Fail -- Chapter 3: The March and Retreat of Democracy -- Chapter 4: The Authoritarian Temptation -- Chapter 5: The Decline of American Democracy -- Chapter 6: Russia's Global Assault -- Chapter 7: China's Stealth Offensive -- Chapter 8: Are People Losing Faith in Democracy? -- Chapter 9: Meeting the Autocrats Challenge -- Chapter 10: Fighting Kleptocracy -- Chapter 11: A Foreign Policy for Freedom -- Chapter 12: Making the Internet Safe for Democracy -- Chapter 13: Reviving American Democracy -- Chapter 14: Conclusion: A New Birth of Freedom.
서지주기
Includes bibliographical references and index.
일반주제명
Democracy.
주제명(지명)
United States --Politics and government --2017-.

Democracy as problem solving : civic capacity in communities across the globe

Development and democracy : what have we learned and how?

To craft democracies : an essay on democratic transitions

In search of democracy

The spirit of democracy : the struggle to build free societies throughout the world 1st ed

The diversity of democracy : corporatism, social order and political conflict