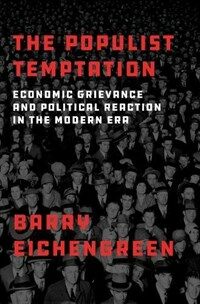 자료유형
단행본
개인저자
Eichengreen, Barry J.
서명 / 저자사항
The populist temptation : economic grievance and political reaction in the modern era / Barry Eichengreen.
발행사항
New York, NY :   Oxford University Press,   c2018.
형태사항
xiv, 244 p. ; : ill. ; 25 cm.
ISBN
9780190866280 (hardback) 9780190866297 (updf) 9780190866303 (epub)
요약
" In the last few years, populism--of the right, left, and center varieties--has spread like wildfire throughout the world. The impulse reached its apogee in the United States with the election of Trump, but it was a force in Europe ever since the Great Recession sent the European economy into a prolonged tailspin. In the simplest terms, populism is a political ideology that vilifies economic and political elites and instead lionizes 'the people.' The people, populists of all stripes contend, need to retake power from the unaccountable elites who have left them powerless. And typically, populists' distrust of elites shades into a catchall distrust of trained experts because of their perceived distance from and contempt for 'the people.' Another signature element of populist movements is faith in a savior who can not only speak directly to the people, but also serve as a vessel for the plain people's hopes and dreams. Going back to the 1890s, a series of such saviors have come and gone in the US alone, from William Jennings Bryan to Huey Long to--finally--Donald Trump. In The Populist Temptation, the eminent economic historian Barry Eichengreen focuses on the global resurgence of populism today and places it in a deep context. Alternating between the present and earlier populist waves from modern history, he argues that populists tend to thrive most in the wake of economic downturns, when it is easy to convince the masses of elite malfeasance. Yet while there is more than a grain of truth that bankers, financiers, and 'bought' politicians are responsible for the mess, populists' own solutions tend to be simplistic and economically counterproductive. Moreover, by arguing that the ordinary people are at the mercy of extra-national forces beyond their control--international capital, immigrants, cosmopolitan globalists--populists often degenerate into demagoguery and xenophobia. There is no one solution to addressing the concerns that populists raise, but Eichengreen argues that there is an obvious place to start: shoring up and improving the welfare state so that it is better able to act as a buffer for those who suffer most during economic slumps. For example, America's patchwork welfare state was not well equipped to deal with the economic fallout that attended globalization and the decline of manufacturing in America, and that played no small part in Trump's victory. Lucidly explaining both the appeals and dangers of populism across history, this book is essential reading for anyone seeking to understand not just the populist phenomenon, but more generally the lasting political fallout that follows in the wake of major economic crises. "--
내용주기
Machine generated contents note: -- Preface -- Chapter 1. The Populist Archetype -- Chapter 2. American Panorama -- Chapter 3. Luddites and Laborers -- Chapter 4. Voyage of the Bismarck -- Chapter 5. The Associationalist Way -- Chapter 6. Unemployment and Reaction -- Chapter 7. The Age of Moderation -- Chapter 8. Things Come Apart -- Chapter 9. Trumped Up -- Chapter 10. Breaking Point -- Chapter 11. Containment -- Chapter 12. Au Revoir Europe? -- Chapter 13. Prospects.
서지주기
Includes bibliographical references and index.
일반주제명
Populism --History. Populism --Economic aspects. Welfare state.

The populist temptation : economic grievance and political reaction in the modern era

The populist explosion : how the great recession transformed American and European politics

The next democracy? : the possibility of popular control

Minorities and populism -- critical perspectives from South Asia and Europe

The global rise of populism : performance, political style, and representation

For a left populism

Cultural backlash : Trump, Brexit, and the rise of authoritarian populism

Politics, language, and time : essays on political thought and history

The new dynamics of democracy in South Korea

The political economic of making and implementing social policy in China

Libertas and res publica in the Roman Republic : ideas of freedom and Roman politics

Where are we now? : the epidemic as politics

The economic other : inequality in the American political imagination