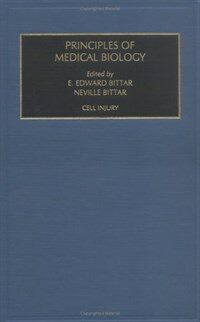 자료유형
E-Book(소장)
개인저자
Bittar, E. Edward. Bittar, Neville.
서명 / 저자사항
Cell injury [electronic resource] / edited by E. Edward Bittar, Neville Bittar.
발행사항
Stamford, Conn. :   JAI Press,   1998.
형태사항
1 online resource (xii, 302 p.) : ill.
총서사항
Principles of medical biology ;v. 13
ISBN
9781559388184 1559388188 9780080528779 0080528775
요약
At no time since the introduction of cell pathology by Virchov more than a century ago has the outlook for pathology as an integrated discipline been brighter. It is surely clear that the revolution of molecular biology and biotechnology has wrought profound changes in the various basic medical sciences including pathology. But to say this is hardly enough, particularly since the burgeoning field of molecular pathology has been challenged and altered by a powerful concept, namely, programmed cell death. Called apoptosis, which in Greek means falling off, it is intimately connected with cell removal and regeneration; that is, with tissue homeostasis. Nowhere is this more dramatically illustrated as a physiological process than in the gut, endometrium, and embryo. Similarly, little doubt is left that clusters of apoptotic-induced genes are involved in the control of carcinogenesis. The evidence for this is already compelling; it is plain, for instance, that p53 triggers apoptosis whenever DNA repair is incomplete. The question now is, how quickly can the Genome project shed some light on the genetics underlying apoptosis? It is tolerably clear that there is no such thing as a general model of cell injury, but there are models, as it should be. One thing is already certain: cell stress during septicemia is the quintessential model. Death here requires the failure of at least three organs! We are told that oxidative stress plays a major role in the pathogenesis of the syndrome. This is not surprising. The whole subject of reactive oxygen species (ROS) is thus given much weight. By far, the most important mechanisms underlying membrane lesions, due to ROS, are those involving inactivation of several key enzymes among a host of enzymes, lipid peroxidation, and iron speeding up bydroxyl radical production. The stark fact is that evolutionary pressure has produced a fiasco by not endowing the cell with enough antioxidant power or reducing the ROS pool. In organs with high O2 consumption, mitochondrial leakage of O2 (the superoxide anion) could well be considerable. Thus our main point here is that caloric restriction gives us a way of tackling the problem for the time being. One has only to remember that it improves survival. Whether there has been a "breakthrough" is not yet quite certain, but oxidative stress combined with long-term overactivation of glutamate receptors may enable us to understand several neurodegenerative disorders including Parkinson's disease. This broad topic is touched upon in detail in the Neurobiology module (Volume 14). There is a vast literature relating to injury of heart muscle. Two chapters address this topic. Looking back, are we to conclude that a membrane lesion, which is essentially functional, does not exist? Consider, as an example, the NMR experiments in which a raised Pco2, leads very rapidly to a fall in heart muscle pH. We also venture whether it begs several fundamental questions relating to events that precede the onset of necrobiosis. A telling argument is that an early event could be as simple as the root of the problem in ischemia is not as simple as that of a leaky membrane. But the initiating event would seem to be a redox imbalance vix., changes in cytosolic and mitochondrial NAD+/NADH. We urge the student to go back to Volume 4 (Part II) and read, once more, the chapter on Cellular ATP by Harris. In Part IV, the chapter on the Human Heat Shock Response by Jurivich merits a second reading. Though the present volume is a veritable source of many unanswered questions, it has the distinct simplicity of telling us that molecular pathology, like molecular biology, represents a way of thinking.
일반주기
Title from e-Book title page.
서지주기
Includes bibliographical references and index.
이용가능한 다른형태자료
Issued also as a book.
일반주제명
Pathology, Cellular. Apoptosis. Free radicals (Chemistry) --Pathophysiology. Heart cells. Cells --pathology. Cell Physiological Phenomena.
바로가기
ScienceDirect   URL

The year book of general medicine

The year book of medicine

The biology of cancer