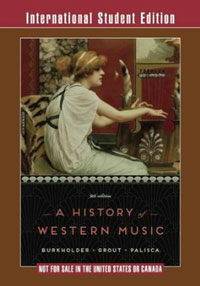 Britten and Auden in the thirties, the year 1936 : the T. S. Eliot memorial lectures delivered at the Univ. of Kent at Cantebury in Nov. 1979

Standard history of music : a first history for students at all ages : forty illustrated story lessons in the development of musical art, adapted for beginners, musical clubs, private teaching, classw

Music and the European mind

Music in the romantic era

A history of music