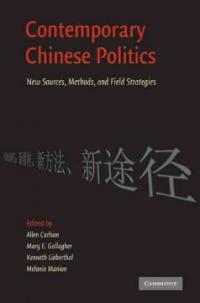 자료유형
단행본
개인저자
Carlson, Allen, 1968-.
서명 / 저자사항
Contemporary Chinese politics : new sources, methods, and field strategies / edited by Allen Carlson ... [et al.].
발행사항
New York :   Cambridge University Press,   2010.
형태사항
xii, 315 p. : ill., maps ; 24 cm.
ISBN
9780521197830 052119783X 9780521155762 (pbk.) 0521155762 (pbk.)
요약
"Contemporary Chinese Politics: Sources, Methods, and Field Strategies considers how new and diverse sources and methods are changing the study of Chinese politics. Contributors spanning three generations in China studies place their distinct qualitative and quantitative methodological approaches in the framework of the discipline and point to challenges or opportunities (or both) of adapting new sources and methods to the study of contemporary China. How can we more effectively use new sources and methods of data collection? How can we better integrate the study of Chinese politics into the discipline of political science, to the betterment of both? How can we more appropriately manage the logistical and ethical problems of doing political research in the challenging Chinese environment? In addressing these questions, this comprehensive methodological survey will be of immense interest to graduate students heading into the field for the first time and experienced scholars looking to keep abreast of the state of the art in the study of Chinese politics"--
서지주기
Includes bibliographical references and index.
일반주제명
Political science --Methodology.
주제명(지명)
China --Politics and government --2002-.

China across the divide : the domestic and global in politics and society

China after the cultural revolution: a selection from the Bulletin of the Atomic Scientists

The origins of statecraft in China. 1 : The Western Chou Empire

Debating political reform in China : rule of law vs. democratization

Elites in the People's Republic of China

The political reconstruction of China

The rise and fall of the neoliberal order : America and the world in the free market era