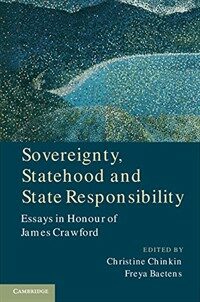 자료유형
단행본
개인저자
Crawford, James, 1948-. Chinkin, C. M. Baetens, Freya.
서명 / 저자사항
Sovereignty, statehood and state responsibility : essays in honour of James Crawford / edited by Christine Chinkin, Freya Baetens.
발행사항
Cambridge, United Kingdom :   Cambridge University Press,   2015.
형태사항
xlviii, 479 p. ; 24 cm.
ISBN
9781107044258 (hardback)
요약
"This collection of essays focusses on the following concepts: sovereignty (the unique, intangible and yet essential characteristic of States), statehood (what it means to be a State, and the process of acquiring or losing statehood) and State responsibility (the legal component of what being a State entails). The unifying theme is that they have always been and will in the future continue to form a crucial part of the foundations of public internationa
서지주기
Includes bibliographical references and index.
일반주제명
Sovereignty. State, The. Government liability. International law.

Statehood and self-determination : reconciling tradition and modernity in international law

The right to self-determination under international law : "selfistans", secession and the rule of the great powers

The theory of self-determination

Tolerance through law : self governance and group rights in South Tyrol

Regulating the use of force in international law : stability and change

The Poseidon project : the struggle to govern the world's oceans