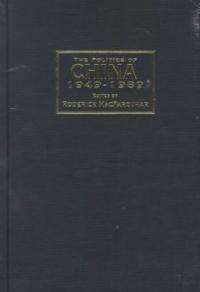 The politics of China : the eras of Mao and Deng 2nd ed (Loan 1 times)

The paradox of China's post-Mao reforms

China modernizes : threat to the West or model for the rest?

Politics in China : an introduction

The politics of China : sixty years of the People's Republic of China 3rd ed

The politics of China : the eras of Mao and Deng 2nd ed

The spirit of Chinese politics : a psychocultural study of the authority crisis in political development

The political economic of making and implementing social policy in China

An American diplomat in China

The perfect dictatorship : China in the 21st century

The dragon and the bear : inside China and Russia today