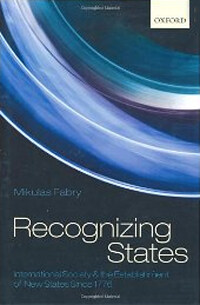 Recognizing states : international society and the establishment of new states since 1776 (5회 대출)

This book examines recognition of new states, the practice historically employed to regulate membership in international society. The last twenty years have witnessed new or lingering demands for statehood in different areas of the world. The claims of some, like those of Bosnia and Herzegovina, Eritrea, Croatia, Georgia and East Timor, have achieved general recognition; those of others, like Kosovo, Tamil Eelam, South Ossetia, Abkhazia and Somaliland, have not. However, even as most of these claims gave rise to major conflicts and international controversies, the criteria for acknowledgment of new states have elicited little systematic scholarship. Drawing upon writings of English School theorists, this study charts the practice from the late eighteenth century until the present. Its central argument is that for the past two hundred years state recognition has been tied to the idea of self-determination of peoples. Two versions of the idea have underpinned the practice throughout most of this period - self-determination as a negative and a positive right. The negative idea, dominant from 1815 to 1950, took state recognition to be acknowledgment of an achievement of de facto statehood by a people desiring independence. Self-determination was expressed through, and externally gauged by, self-attainment. The positive idea, prevalent since the 1950s, took state recognition to be acknowledgment of an entitlement to independence in international law. The development of self-determination as a positive international right, however, has not led to a disappearance of claims of statehood that stand outside of its confines. Groups that are deeply dissatisfied with the countries in which they presently find themselves continue to make demands for independence even though they may have no positive entitlement to it. The book concludes by expressing doubt that contemporary international society can find a sustainable basis for recognizing new states other than the original standard of de facto statehood.

Indigenous sovereignty and the democratic project

The equality of states in international law

The equality of states in international law

Distribution of responsibilities in international law

Recognition and the United Nations

Recognizing states : international society and the establishment of new states since 1776

Sovereignty's promise : the state as fiduciary

The power of legitimacy among nations

The League of Nations and the recognition of states

Dividing the state: legitimacy, secession and the doctrine of oppression