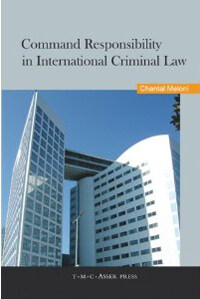 Command responsibility doctrine allows military commanders and civilian leaders to be held responsible for crimes committed by their subordinates. This form of responsibility has gained much attention in recent years, but it still presents several open questions and critical difficulties arise in its application. Chantal Meloni's in-depth study of the doctrine traces the roots of such criminal responsibility, from its military origins to its first appearances in the international case law after World War II. Particular attention is paid to the jurisprudence of the ad hoc Tribunals, which extensively elaborated on the issue, and to the provision of Article 28 of the ICC Statute. The systematic analysis of command responsibility outlines its different forms and finds it a proper role within the complex net of responsibilities related to the commission of international crimes.

Elements of war crimes under the Rome Statute of the International Criminal Court : sources and commentary

The justice dilemma : leaders and exile in an era of accountability

Law and war : an American story

The law of command responsibility

The pursuit of international criminal justice : a world study on conflicts, victimization, and post-conflict justice

The rise and fall of war crimes trials : from Charles I to Bush II

Protecting civilians from the effects of explosive weapons : an analysis of international legal and policy standards

Law, war and crime : war crimes trials and the reinvention of international law

Regulating the use of force in international law : stability and change

The Poseidon project : the struggle to govern the world's oceans