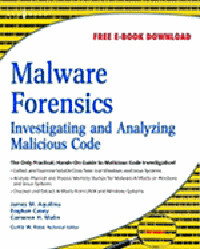 Malware Forensics: Investigating and Analyzing Malicious Code covers the emerging and evolving field of "live forensics," where investigators examine a computer system to collect and preserve critical live data that may be lost if the system is shut down. Unlike other forensic texts that discuss ?live forensics? on a particular operating system, or in a generic context, this book emphasizes a live forensics and evidence collection methodology on both Windows and Linux operating systems in the context of identifying and capturing malicious code and evidence of its effect on the compromised system.
Malware Forensics: Investigating and Analyzing Malicious Code also devotes extensive coverage of the burgeoning forensic field of physical and process memory analysis on both Windows and Linux platforms. This book provides clear and concise guidance as to how to forensically capture and examine physical and process memory as a key investigative step in malicious code forensics.
Prior to this book, competing texts have described malicious code, accounted for its evolutionary history, and in some instances, dedicated a mere chapter or two to analyzing malicious code. Conversely, Malware Forensics: Investigating and Analyzing Malicious Code emphasizes the practical ?how-to? aspect of malicious code investigation, giving deep coverage on the design of a malicious code analysis lab, the tools and techniques of conducting runtime behavioral malware analysis (such as file, registry, network and port monitoring) and static code analysis (such as file identification and profiling, strings discovery, armoring/packing detection, disassembling, debugging), and more.
After learning the tools and techniques covered in the book?s earlier chapters, the final chapters of Malware Forensics: Investigating and Analyzing Malicious Code focus on using honeypots to collect malicious code in the wild and conducting technical profiling and threat assessment based upon malicious code analysis findings.

* Authors have investigated and prosecuted federal malware cases, which allows them to provide unparalleled insight to the reader.
* First book to detail how to perform ?live forensic? techniques on malicous code.
* Companion Web site provides working code for analysis.
* In addition to the technical topics discussed, this book also offers critical legal considerations addressing the legal ramifications and requirements governing the subject matter

The art of computer virus research and defense

Computer viruses and other malicious software : a threat to the Internet economy

Organisation for Economic Co-operation and Development
005.86