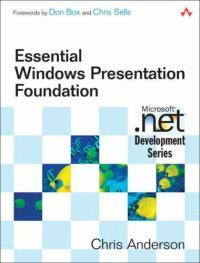 “Chris Anderson was one of the chief architects of the next-generation GUI stack, the Windows Presentation Framework (WPF), which is the subject of this book. Chris’s insights shine a light from the internals of WPF to those standing at the entrance, guiding you through the concepts that form the foundation of his creation.”
–From the foreword by Chris Sells

“As one of the architects behind WPF, Chris Anderson skillfully explains not only the ‘how,’ but also the ‘why.’ This book is an excellent resource for anyone wanting to understand the design principles and best practices of WPF.”
–Anders Hejlsberg, technical fellow, Microsoft Corporation

“This is an excellent book that does a really great job of introducing you to WPF, and explaining how to unlock the tremendous potential it provides.”
–Scott Guthrie, general manager, Developer Division, Microsoft

“WPF is a whole new animal when it comes to creating UI applications, drawing on design principles originating from both Windows Forms and the Web. Chris does a great job of not only explaining how to use the new features and capabilities of WPF (with associated code and XAML based syntax), but also explains why things work the way they do. As one of the architects of WPF, Chris gives great insight into the plumbing and design principles of WPF, as well as the mechanics of writing code using it. This is truly essential if you plan to be a serious WPF developer.”
–Brian Noyes, chief architect, IDesign Inc.; Microsoft Regional Director; Microsoft MVP

“I was given the opportunity to take a look at Chris Anderson’s book and found it to be an exceedingly valuable resource, one I can comfortably recommend to others. I can only speak for myself, but when faced with a new technology I like to have an understanding of how it relates to and works in relation to the technology it is supplanting. Chris starts his book by tying the WPF directly into the world of Windows 32-bit UI in C++. Chris demonstrates both a keen understanding of the underlying logic that drives the WPF and how it works and also a skill in helping the reader build on their own knowledge through examples that mimic how you would build your cutting edge applications.”
–Bill Sheldon, principal engineer, InterKnowlogy

In Essential Windows Presentation Foundation, former WPF architect Chris Anderson systematically introduces this breakthrough platform, focusing on the concepts and techniques working developers need in order to build robust applications for real users. Drawing on his unique experience as an architect on the team, Anderson thoroughly illuminates the crucial new concepts underlying WPF and reveals how its APIs work together to offer developers unprecedented value.

The essential guide to MS-DOS 5 programming

Windows Vista inside out

The old new thing : Practical development throughout the evolution of Windows