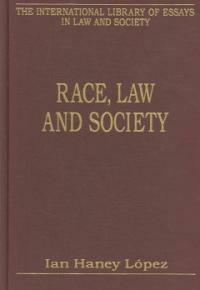 The cultivation of resentment : treaty rights and the new right

A third way : decolonizing the laws of indigenous cultural protection

Rethinking the judicial settlement of Reconstruction

The Black laws : race and the legal process in early Ohio

Race, rights, and reparation : law and the Japanese American internment

Affirmative action and justice : a philosophical and constitutional inquiry

Legal history of the color line : the rise and triumph of the one-drop rule

The alchemy of race and rights