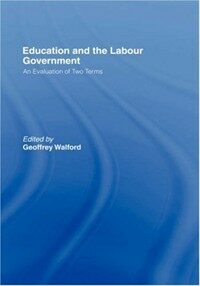 Education and the labour government : an evaluation of two terms / edited by Geoffrey Walford (Loan 4 times)

Central & local control of education after the education reform act 1988

A lesson in school reform from Great Britain

Sentimental education : schooling, popular culture, and the regulation of liberty

Education, training, and the future of work. I : Social, political, and economic contexts of policy development

Education and the labour government : an evaluation of two terms / edited by Geoffrey Walford

Equality of educational opportunity : ideas and politics in England, 1900-1970

Education and Labour Party ideologies, 1900-2001 and beyond

Policy-making in education : the breakdown of consensus : a reader 1st ed

Conservative party education policies, 1976-1997 : the influence of politics and personality

Education, reform, and the state : twenty-five years of politics, policy, and practice