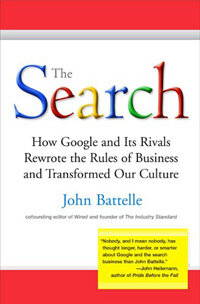 The search : how Google and its rivals rewrote the rules of business and transformed our culture (15회 대출)

------------Amazon.com-------------
If you pick your books by their popularity--how many and which other people are reading them--then know this about The Search: it's probably on Bill Gates' reading list, and that of almost every venture capitalist and startup-hungry entrepreneur in Silicon Valley. In its sweeping survey of the history of Internet search technologies, its gossip about and analysis of Google, and its speculation on the larger cultural implications of a Web-connected world, it will likely receive attention from a variety of businesspeople, technology futurists, journalists, and interested observers of mid-2000s zeitgeist.

This ambitious book comes with a strong pedigree. Author John Battelle was a founder of The Industry Standard and then one of the original editors of Wired, two magazines which helped shape our early perceptions of the wild world of the Internet. Battelle clearly drew from his experience and contacts in writing The Search. In addition to the sure-handed historical perspective and easy familiarity with such dot-com stalwarts as AltaVista, Lycos, and Excite, he speckles his narrative with conversational asides from a cast of fascinating characters, such Google's founders, Larry Page and Sergey Brin; Yahoo's, Jerry Yang and David Filo; key executives at Microsoft and different VC firms on the famed Sandhill road; and numerous other insiders, particularly at the company which currently sits atop the search world, Google.

The Search is not exactly the corporate history of Google. At the book's outset, Battelle specifically indicates his desire to understand what he calls the cultural anthropology of search, and to analyze search engines' current role as the "database of our intentions"--the repository of humanity's curiosity, exploration, and expressed desires. Interesting though that beginning is, though, Battelle's story really picks up speed when he starts dishing inside scoop on the darling business story of the decade, Google. To Battelle's credit, though, he doesn't stop just with historical retrospective: the final part of his book focuses on the potential future directions of Google and its products' development. In what Battelle himself acknowledges might just be a "digital fantasy train", he describes the possibility that Google will become the centralizing platform for our entire lives and quotes one early employee on the weightiness of Google's potential impact: "Sometimes I feel like I am on a bridge, twenty thousand feet up in the air. If I look down I'm afraid I'll fall. I don't feel like I can think about all the implications."

Some will shrug at such words; after all, similar hype has accompanied other technologies and other companies before. Many others, though, will search Battelle's story for meaning--and fast. --Peter Han

------------Book Description-------------
What does the world want? According to John Battelle, a company that answers that question -- in all its shades of meaning -- can unlock the most intractable riddles of both business and culture. And for the past few years, that's exactly what Google has been doing.

Jumping into the game long after Yahoo, Alta Vista, Excite, Lycos, and other pioneers, Google offered a radical new approach to search, redefined the idea of viral marketing, survived the dotcom crash, and pulled off the largest and most talked about initial public offering in the history of Silicon Valley.

But The Search offers much more than the inside story of Google's triumph. It's also a big-picture book about the past, present, and future of search technology, and the enormous impact it is starting to have on marketing, media, pop culture, dating, job hunting, international law, civil liberties, and just about every other sphere of human interest.

More than any of its rivals, Google has become the gateway to instant knowledge. Hundreds of millions of people use it to satisfy their wants, needs, fears, and obsessions, creating an enormous artifact that Battelle calls "the Database of Intentions." Somewhere in Google's archives, for instance, you can find the agonized research of a gay man with AIDS, the silent plotting of a would-be bombmaker, and the anxiety of a woman checking out her blind date. Combined with the databases of thousands of other search-driven businesses, large and small, it all adds up to a goldmine of information that powerful organizations (including the government) will want to get their hands on.

No one is better qualified to explain this entire phenomenon than Battelle, who cofounded Wired and founded The Industry Standard. Perhaps more than any other journalist, he has devoted his career to finding the holy grail of technology -- something as transformational as the Macintosh was in the mid- 1980s. And he has finally found it in search.

Battelle draws on more than 350 interviews with major players from Silicon Valley to Seattle to Wall Street, including Google cofounders Larry Page and Sergey Brin and CEO Eric Schmidt, as well as competitors like Louis Monier, who invented AltaVista, and Neil Moncrief, a soft-spoken Georgian whose business Google built, destroyed, and built again.

Battelle lucidly reveals how search technology actually works, explores the amazing power of targeted advertising, and reports on the frenzy of the Google IPO, when the company tried to rewrite the rules of Wall Street and declared "don't be evil" as its corporate motto.

For anyone who wants to understand how Google really succeeded -- and the implications of a world in which every click can be preserved forever -- THE SEARCH is an eye-opening and indispensable read.

"Battelle has written a brilliant business book, but he's also done something more... All searchers should read it."
-Walter Isaacson, CEO of the Aspen Institute

"This book ought to be called 'The Answer.' As usual, John Battelle delivers insightful, thought-provoking, and essential reading."
-Seth Godin, author of All Marketers Are Liars and Purple Cow

"Nobody, and I mean nobody, has thought longer, harder, or smarter about Google and the search business than John Battelle."
-John Heilemann, author of Pride Before the Fall

"A must read for anyone endeavoring to understand one of the most important trends of this generation.'"
-Mary Meeker, Managing Director, Internet Analyst, Morgan Stanley

"Battelle has... figured out why "search" is so damned important to the future of everything digital. Even more impressive, he's actually managed to turn the subject into a compelling analog story.
-John Huey, editorial director, Time inc.

Googled : the end of the world as we know it

The search : how Google and its rivals rewrote the rules of business and transformed our culture

The search : how Google and its rivals rewrote the rules of business and transformed our culture

In the plex : how Google thinks, works, and shapes our lives

Unsustainable world : are we losing the battle to save our planet?