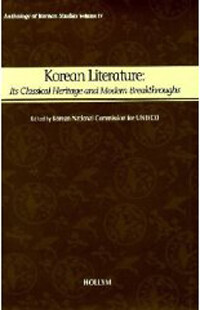 Vol. 4 of Anthology of Korean Studies Series. This volume, Korean Literature: Its Classical Heritage and Modern Breakthroughs, consists of 24 articles that are still considered valuable in the field as academic articles or critical essays that have appeared in the Korea Journal over the past 40 years. The articles were carefully selected under the guidance of Professor Hwang Jong-yon. The present volume is divided into five major themes. Part I includes an explanation of the historical and critical bases for understanding modernity as expressed in Korean literature. Part II consists of major reviews of representative writers and their works over the past 100 years of Korean modern literature. Part III is a compilation of explanatory writings that facilitate readers' comprehension of traditional literary genres--from pansori to Korean poetry in Chinese--and their aesthetics and ideology, which have influenced both the creation and critique of contemporary Korean literature. Part IV critically evaluates the literatures of both North and South Korea after the Korean War. The final section approaches Korean literature from an international perspective in examining the literature of Korean immigrants living abroad. In recent days, both researchers and general readers outside Korea have taken an increasing interest in Korean literature. Accordingly, translations of and writings about Korean literature have been increasingly produced. We hope this volume can serve as a textbook and reference manual for scholars, students, and anyone else interested in Korean literature.

Soldiers on the cultural front : developments in the early history of North Korean literature and literary policy

A history of Korean literature

An introduction to classical Korean literature : from hyangga to pansori