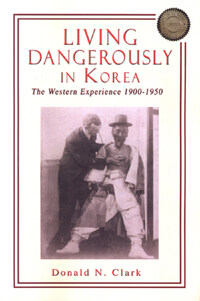 Written by the grandson and son of missionaries, this well-researched book gives a Westerner's account of how it was like to live in Korea during the Japanese occupation and the post-colonial, pre-Korean War period. During that time in Korea, Westerners were either Christian missionaries, gold-mine speculators or foreign diplomats. Through the lives and experiences of these Westerners, the author highlights the major historical events of modern Korean history. The first part of the book mainly focuses on the foreign missionary community with chapters on other foreign groups, White Russians and miners, during the Japanese occupation. The second part focuses on events during the post-colonial period between 1945-1950 which eventually led to the Korean War. The last chapter, Ripped by War opens with the Korean War. In the epilogue, Clark writes about the legacy of the Western "pioneers" of Korea as well as their surviving institutions. He notes that though the Westerners who crossed the ocean were "keen to make a difference to the people of Korea, little did they realize how much Korea was bound to change them in return."

Samguk yusa : legends and history of the three kingdoms of ancient Korea

Samguk yusa : legends and history of the three kingdoms of ancient Korea