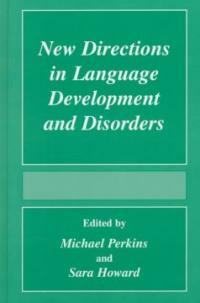 Language development from two to three

How children learn the meanings of words

How language comes to children : from birth to two years

Language and learning : [the importance of speech in children's development] 2nd ed

The Cambridge handbook of child language

The lexicon in acquisition

Cognitive development and the acquisition of language

Conversation analysis and language alternation : capturing transitions in the classroom

How languages are learned / 5th ed

Formal semantics : a mathematical approach to the analysis of meaning