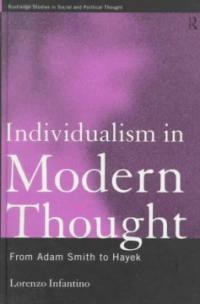 The ego and his own : the case of the individual against authority Dover ed

Staring : how we look

Employment and social developments in Europe 2011

Individualism in modern thought : from Adam Smith to Hayek

The upswing : how America came together a century ago and how we can do it again / First Simon & Schuster hardcover ed

On scandal : moral disturbances in society, politics, and art

Deviance and medicalization: from badness to sickness : with a new afterword by the authors Expanded ed